Year After Year is a tabletop RPG about an ordinary family living through tumultuous change. We follow their trials and tribulations as the years roll by, with political, technological and social upheaval rocking their world.

YaY is a fairly freeform game, using a simple structure to enable you to generate exciting imagined futures, beginning with the near-future and rolling forward into strange times indeed. The game keeps a focus on the family, their drama and relationships, but getting them caught up in the relentless change that is the theme of the game.

In order to download this game you must purchase it at or above the minimum price of $5 USD. You will get access to the following files:

Year After Year is a multiplayer rpg about following a family several decades through time as they adapt to social change.

It's 6 pages, and the layout is bare-bones but readable, but Year After Year's concept and execution is intense.

Part of setting up the game involves picking the broad social trends, newsworthy events, and other societal shifts that are in play when you frame your first scene with the family. You can connect your characters to these things quite directly (maybe the caregiver is responsible for the technology that allowed separatists to drop an orbital colony on your planet), but you can also connect them more broadly to the ripple effects of those events and trends. Maybe the baby of the family is expected to be part of the first generation with an average 100+ year lifespan.

From that setup, the game plays out in a series of family meetings. These meetings are charged events, and the mechanics reinforce that. Played even half-seriously, the game might end up being a melodrama, or it might be heart-cuttingly raw.

Because of this, the endgame, when it comes, feels really high stakes. All of the game's mechanics are simply decision-making and collaborative storytelling, but at the endgame everyone locks in or changes one of the societal trends, and tells the ending to their character's storyline.

Again, even if you're trying really hard for a comedic sitcom tone, sitcoms don't even reliably stick the landing of having a non-serious last episode, so I think this game is going to punch you in the feels.

Overall, if above all else you value intensity, get this. I think it's guaranteed to produce situations and characters that hit hard, and I would strongly recommend having safety mechanics on deck, but I think playing it will also tend to be memorable and profound. 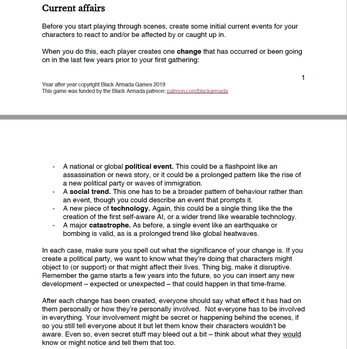 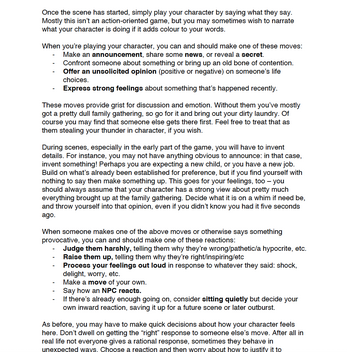